First, the Work of Paying Attention to the World

by univirtualblog
in Attention, World
0 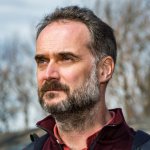 Mar 22, 2019— “David George Haskell is an ecologist and evolutionary biologist whose work is located at the thrumming intersection between science and poetry. He integrates rigorous research with a deeply contemplative, immersive approach, and his subjects are unexpected and revelatory. His widely acclaimed, Pulitzer-finalist book, “The Forest Unseen,” chronicles the story of the universe in one square meter of forest ground in Tennessee. His follow-up book in 2017, “The Songs of Trees,” encompasses a study of humanity’s varied roles within biological networks, as heard through the acoustics of a dozen trees around the world. As one reviewer put it, ‘With a poet’s ear and and a naturalist’s eye, Haskell re-roots us in life’s grand creative struggle and encourages us to turn away from empty individuality. The Songs of Trees reminds us that we’re not alone and never have been.'” Haskell shares more about his work and perspectives in this interview. (459 reads)

Take ActionFor more inspiration read this piece by Haskell on NPR: “Life is the Network, Not the Self.” [
more]

Six Things to Know About Artificial Intelligence in K-12 Education

Getting Proximate to Pain and Holding the Power of Love

Go Inside the School of the Future at ISTE 2018

Six Things to Know About Artificial Intelligence in K-12 Education

Turning Ourselves Towards Stability and Hospitality

Meeting Demands For A Modernized IT Infrastructure

How to Hire Tech-Savvy Teachers for Blended Learning

Turning Ourselves Towards Stability and Hospitality

Meeting Demands For A Modernized IT Infrastructure

How to Hire Tech-Savvy Teachers for Blended Learning

No Result
View All Result